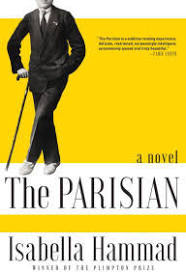 I fell in love with this book early on in my reading. It was rich in history, (a time period I know little about) cultural references, cultural differences, and exquisite writing. Midhat Kamal was the son of a wealthy textile merchant in Nablus, a town in Ottoman Palestine. He was educated at a boarding school in Constantinople and went off to France to study medicine in 1914. It truly was culture shock for him, in spite of his having taken French in school, he knew nothing of French culture, save for the somewhat jaded perceptions shared by Faruq, a fellow passenger on the ship to Marseilles. In Montpellier, he boarded in the home of Doctor Molineau, a member of the medical school faculty, and his daughter, Jeannette. Predictably, Midhat fell in love with Jeannette. The two concealed the nature of their relationship until a shocking turn of events opened Midhat’s eyes to the inherent French prejudice towards Arabs in general, and Midhat specifically. As the story unfolds, it’s sad that so frequently in fiction and real life, people’s destinies are changed irrevocably by what is not said. The book sort of fell apart for me in the third part, with some plot points that didn’t make sense to me, but it didn’t spoil my overall enjoyment of the book. It was an ambitious undertaking for a debut novelist and the beginning of a wonderful literary career.

THE BEAUTY: When Midhat returned to Nablus after college, he spent a lot of time with his cousin, Jamil. At the beginning of April, they took a three hour bus ride to Jerusalem for Nebi Musa, a seven-day long festival celebrated annually by Palestinian Muslims beginning on the Friday before Good Friday in the old Greek Orthodox calendar. While watching a dervish dance, Midhat experienced something close to joy, but deeper and more serene. At that moment, a line dance began, and the dervish gave way to a line of village men, grasping elbows and hopping up and down in the dabke.

THE FOOD: In preparation for her grandson ‘s return from Paris, Um Taher enlisted the help of her neighbor and friend to prepare stuffed zucchini for the ladies’ reception to celebrate his return.

In a 5-quart pot with a lid, heat the olive oil over medium heat; add the onion and sauté for 6-8 minutes, or until softened; add the garlic and sauté another minute. Remove ¾ of the onion/garlic mixture and reserve in a separate bowl. For the tomato broth, to the pot, add the tomatoes, tomato paste, ½ tsp salt, ¼ tsp pepper, bouillon, bay leaves, fresh parsley, and enough water to fill the pot so that it is somewhere between 2/3 to 3/4 of the way full. Heat the tomato broth over low heat until it comes to a simmer.

For the zucchini filling, mix together the reserved onion and garlic, raw ground meat, uncooked rice, melted butter, 1½ tsp salt, ½ tsp pepper, and allspice. Stuff each zucchini shell with the meat and rice mixture; pack the mixture down so that when turned upside-down the mixture doesn’t fall out of the zucchini; leave a gap of ~¾” at the top of each zucchini because the rice will expand when cooking.

Add the stuffed zucchini to the simmering tomato broth and cook with the lid on for 60-75 minutes. If the zucchini doesn’t all fit in the pot because there’s too much liquid, you can just ladle some out. Check the zucchini after an hour so as not to overcook by piercing the skin with the tip of a sharp knife. Serve the zucchini garnished with fresh lemon, alongside the tomato broth, or you can eat the tomato broth like soup.

The dish was great, and in my delirium of deliciousness, I forgot to take a picture. It was well worth the effort of hollowing out the zucchini.