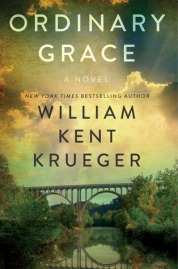 This is a coming of age story set in the summer of 1961 in a small town in the Minnesota River Valley. It is told from 13 year-old Frank’s point of view. Perhaps partly because of the setting, but in greater part because of the writing, the tone of the book  is like a hug. The word that comes to mind is “decency.” Oh, there’s prejudice and gossip and hierarchical society and people who do bad things, but that time period, after World War II when memories of the war had faded but were still present, was a time of most people doing the right thing, behaving decently. So it was with nostalgia that this book transported me back to my own childhood, as I had just turned eleven in the summer of 1961.  Krueger’s writing is direct, with great attention to describing the natural world as Frank and his younger brother Jake experienced it, and as I experienced it vicariously through them and my memories. Here is a passage I selected randomly on the first page I turned to looking for an example of what I mean:

“The sky had changed. The gray had deepened to the color of charcoal and the clouds had begun to boil. An erratic wind had risen and within its gusts was carried the sound of distant thunder from the west. We crossed the backyard and the pasture where the wild grass and daisies rippled as if the skin of the earth was alive. We skirted the Sweeney’s house where laundry hung on the line and I could hear the pop of bed linen snapping in the wind.”

The book was evocative of the time period because of the many cultural references intertwined in the story. “Have Gun Will Travel” was a western TV show as was “The Ruthless Gun,” both of which the brothers watched.  Cars referenced were a 1955 Packard Clipper, a Studebaker, and a Pontiac Star Chief. Books and authors mentioned were Of Mice and Men and Ayn Rand. Then there was Sugar Pops, root beer at the drugstore soda fountain, Jell-o salad, “Surfside Six,” Kool Aid, Boy Scouts, fried baloney sandwiches, tuna casserole, “Public Enemy,” baseball games with the neighborhood kids until it got too dark to see the ball. And so much more.

This is a terrific book, and I’m grateful to the friend who told me about it.

In thinking about the beauty in this book, I kept coming back to the word “decency,” and that led me to think about the art of Norman Rockwell. Isn’t decency really, a way of behaving in which one sees another person for who they are, shows respect, and treats the individual fairly? 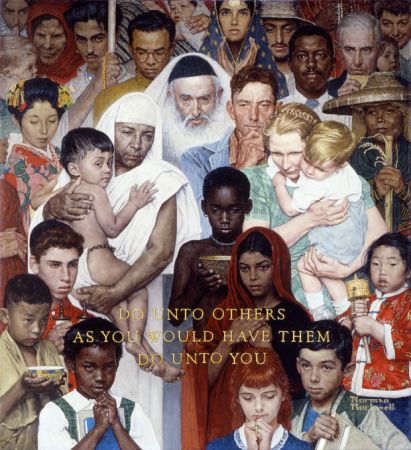 There was a lot of food to transport me back to my childhood, but the one I selected was served after a funeral at the Fellowship Hall of the Methodist Church where Nathan, Frank’s father was the minister. The food was supplied by the female members of the congregation, and reminded me of the  “Church Ladies” I remember from our church, who showed up at the house of the family of the deceased with food and drink. They took care of all the details unobtrusively, and like phantoms, cleaned up the mess and were gone before the widow or widower remembered to thank them.

In a saucepan, melt shortening over medium heat. Stir in brown sugar. Cool slightly. Combine flour, baking powder and salt; add gradually with eggs to shortening mixture. Stir in the vanilla, chips and nuts (batter will be very stiff).