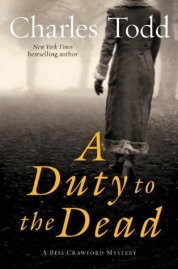 A friend told me that she saw an interview with Hillary Clinton who revealed that her favorite mystery writers are Donna Leon, Louise Penny and Charles Todd. I loved the first two, and didn’t know about the third, so I quickly put this book on hold at the library. Charles Todd is actually a pen name for the writing duo of mother and son, Caroline and Charles. This book is first in the Bess Crawford mystery series.

The book begins with Bess on the Britannic (fleet mate to Titanic) which had been commissioned as a hospital ship in 1916. She nursed a gravely wounded Lieutenant Arthur Graham, and despite her training, which exhorted nurses to distance themselves emotionally from their patients, Bess agreed to carry out Arthur’s death bed request to take a message to his brother Jonathan in Kent. Predictably, Bess gets caught up in family intrigue, and ultimately uses her sleuthing ability to sort things out, not without some harrowing experiences along the way, and an awful lot of tea.

While I was reminded of Jacqueline Winspear’s Maisie Dobbs, the writing here isn’t as stilted, proper, perhaps because the authors are American. I liked the character Bess. Her manner is direct, forthright. She tells the truth, even if it’s an uncomfortable one. She’s tough and cool under fire. Despite this taking place during the early twentieth century, Bess is not unduly hampered by the restrictions imposed by society on young women. Perhaps this is a factor of the world having been turned upside down by the war, although “Maisie” takes place during a similar time period, and she faces more of that than does Bess. The upshot is that the narrative is less oppressive in this book. The ending was unexpected and delightful.

On the train journey to Kent to Arthur’s family home, Bess looked out the window at the passing scenery: rolling downs, farms and the houses of the villages. At this time of year, the fruit trees were bare, but Bess remembered a journey years before, coming up from Dover with her parents after her father’s last posting in India. It had been spring then, and the clouds of blossoms on the fruit trees had taken her breath away after the dry, featureless Northwest Frontier of India.

Bess went out to the local bakery for buns for tea, and to see if a suspicious character who had detained her landlady minutes earlier followed or accosted Bess as well. He did not, so she continued her course for buns. Everyone was doing without the niceties in the war effort, and most of the baker’s supplies went for bread, but there was an occasional surprise with the leftovers, like the Sally Lunn’s on sale last week. The reference was so casual in the book, it seemed that, of course, everyone knows what a Sally Lunn is. Sally Lunn had its origins in either France or England, depending on which story you believe. One legend has it that Sally Lunn, a Huguenot (French Protestant), left her native land to settle in England’s West Country, where she sold her rich, buttery cakes in the streets of Bath. The other tale says that Sally Lunn is actually a corruption of the French soleil lune, sun and moon, and refers to the bread’s golden color and round shape.

Combine the milk, butter, and sugar in a microwave-safe measuring cup or bowl, or in a saucepan. Heat to lukewarm, stirring to soften/melt the butter. Pour the mixture into a mixing bowl, and let it cool until it’s below 120°F, about 15 minutes.

Add the lemon or vanilla, salt, 2 cups of the flour, the eggs, and yeast. Beat the mixture on medium speed for about 3 minutes. Add the remaining flour to the mixture and beat for about 3 minutes, until it becomes a soft, cohesive dough. Note: This is a very sticky, wet dough; it’s too sticky to knead, so has to be beaten to develop its gluten.

Cover the dough and allow it to rise for 45 to 60 minutes, or until almost doubled in bulk.

Lightly grease the cups of two standard muffin pans, 24 cups total. Divide the dough among 18 cups of the muffin pans, filling each a bit more than half full. Cover the pans, and let the rolls rise for 45 to 60 minutes, until they’re noticeably puffy. Towards the end of the rising time, preheat the oven to 350°F.

Bake the rolls until they’re golden brown and a digital thermometer inserted into the center of one reads at least 190°F, about 15 minutes.

Remove the rolls from the oven, and turn them out of the pan onto a rack. Brush with melted butter, if desired. Wrap completely cooled rolls airtight, and store at room temperature for several days; freeze for longer storage.

We loved these, and I will definitely make them again, serivng them at high tea on Sunday.