I heard a trusted reviewer say that this book was laugh-out-loud funny, and though I had unsuccessfully tried a Russo book before with a similar claim, I decided to give this a try. In fairness, rare is the occasion that I, (and I believe most readers out there) truly emit audible sounds of  mirth in response to reading a book. This was no exception. But while I may not have made noise, I made note to myself many times of the cleverness of a thought, or a turn of phrase, with the overall effect being: this is a very amusing, witty, dare I say ironic, if irony also incorporates good-natured sarcasm, book. In his life, the main character, William Henry Devereaux, Jr., plays the straight man. His friends know that he is never serious, and can be a real jerk in service of his humor at their expense. And yet, they are loyal to him, all the while telling him what an ass he is. He’s blessed with a beautiful wife who understands and loves him, even though she recognizes the many ways that he is not present in their shared life. The action takes place in rural Pennsylvania where “Hank” is an English professor, serving as interim head of the department during a serious fiscal threat to the livelihood of his colleagues and himself. Did he cut a deal with administration? Did he make a list ranking his fellow academics according to their usefulness in the department? These are the questions that everyone buzzed about. In the end, Devereaux is true to himself, and despite rampant departmental gossip and speculation, his friends and colleagues finally recognize what they should have known all along about him. A very satisfying read!

My favorite character, after Henry, of course, is Mr. Purdy, Henry’s mother’s landlord, who is smitten with the 73 year-old- her mastery of the English language, and her overall state of preservedness (for her age). He tells Henry that “She’s a real aristocat.” He goes to great lengths to impress her, quizzing Henry at every opportunity about “what his ma likes,” and buying a red pick up truck with a stereo sound system and “antibrakes” to impress her. Mr. Purdy speaks like the BFG in Roald Dahl’s genius children’s book, The BFG (The Big Friendly Giant). Malapropisms Are Them. While bragging to Henry about his experience with the young man who sold him the truck he’s proud of the fact that he did not pay the sticker price. “I chewed him way down from there.” He goes on to add that the salesman “Put brand new tires on it too. Radials, not them recraps.” I could go on, but you get the idea!

There was not a lot of food in the book: a pastrami sandwich, ordered, but not delivered; a prime rib, rare; raw clams with lemon. I initially discarded a sandwich that Henry’s mother made for him, hoping for better pickings as the book progressed, but ended up going back to it. Henry visited his mother who lives in the same town, one afternoon. He initially declined her offer of a pimiento cheese sandwich because his mother is not known for her culinary extravagance, having responded to her husband’s leaving her for a younger woman by throwing herself into an austerity program in all areas of ther life, including food. When he realized that this was his only opportunity to eat until much later in the day, he accepted the offer, bracing himself for two slices of bread joined by the slimmest spread of cheese posssible. When I googled Pennsylvania  food, pimiento cheese came up! I have not been left for a younger woman, so I used a generous amount of cheese for each sandwich.

In a large bowl, stir together cheeses, red peppers, mayonnaise, and Aleppo pepper. Taste and add salt and pepper as needed. Transfer to an airtight container and refrigerate at least 2 hours, preferably overnight.

Spread one slice wth cheese spread, cover with the second piece, slice and serve. You can add lettuce and tomato if desired. Alternatively, you may grill both sides of the sandwich, slice and serve. Either way, yum. 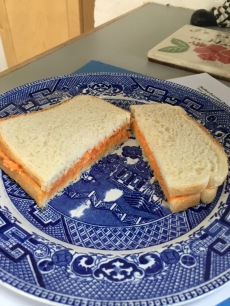 It doesn’t look like much, but that was the point.  It’s supposed to look like the sandwiches Henry’s mother made, with the cheese making a limited appearance on the bread.