Another debut novel, this one grew from an article in a 1939 women’s magazine that Pearce happened upon. Emmeline Lake and her best friend, Bunty, were working girls in 1940’s London. Emmy dreamed of becoming a war correspondent, while Bunty worked in the War Office. When Emmy spotted an ad for a Junior at Launceston Press, she believed this to be her ticket to a correspondent’s life. Reality, of course, finds her doing clerical work, eventually typing Mrs. Bird’s responses to her advice column. Mrs. Bird was a very traditional woman and makes it clear that some subjects will not be addressed in her column, some of which are: marital relations, premarital relations, extramarital relations, physical relations, sexual relations, illegal activities… and on and on. As Emmy read more and more of the letters, she began to feel sorry for the letter writers, and at first, tried to subtly urge Mrs. Bird to extend a few words of kindness and encouragement. But Mrs. Bird had her rules and would not yield: nose “to the grindstone” and all that. She gave no thought to the living conditions in London during the Blitz. Daily raids and bombings were the norm, absolutely everyone had someone they knew and loved in the fight, women were doing jobs that the men had done before they were taken into service, in short, times were difficult and everyone, whether they knew it or not, was looking for comfort, however small. Without saying more, I think you can figure out where the story headed. A key event in the book was based on a historical fact. The Cafe de Paris was night club made popular by the Prince of Wales. On March 8, 1941, it was bombed by the Nazis, killing 34, injuring 80. Ken Snakehips Johnson, a bandleader, was one of the 34. More on him later.

While the plot is predictable, the reader comes away feeling hopeful, for this is a story of people pulling together in adversity, supporting one another in small ways. In life, there are no small kindnesses. In life, it’s really all about kindness.

THE BEAUTY: Kenrick (Snakehips) Reginald Hijman Johnson was born in British Guiana to wealthy parents. At 15, his parents sent him to school in Buckinghamshire, England, before studying medicine at Edinburgh University. At University he pursued his love of music and dance, and sought dance lessons with Buddy Bradley, the man behind Fred Astaire. In 1934, on a trip to New York, he went to Harlem and saw Cab Calloway. On this trip he was inspired to become a bandleader himself and back in England, he became a leader in the Black swing movement. His band, initially called Ken Johnson and his Rhythm Swingers, later changed the name to West Indian Orchestra, and played at the Cafe de Paris. He was 26 years old when 2 German bombs fell through the roof and onto the dance floor on March 8, 1941.

I include a clip of him dancing rather than a recording of his orchestra because I wanted to show a living man, and the music clips were only audio. What would he have accomplished musically in his life, had he had the gift of it?

Ths being a book about the British experience, a lot of tea is consumed, and along with tea, we must have biscuits. At one teatime, Emmy had Garibaldi biscuits. I toyed with making them myself, but then I had an epiphany! I don’t have to make everything in this portion of the blog, if I can buy the actual product mentioned. There’s a little shop called the The Best of British Fine Imported Goods in Newburyport where I bought this package for $3.95, along with the shortbread and Cadbury biscuits. I didn’t have to make anything at all! It was all store bought. 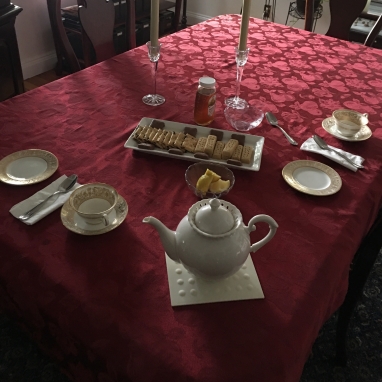 Tea time really is a lovely and relaxing way to refuel in the middle of the afternoon. Even on a hot August day, it was the pause that refreshed.