I loved this book: the cover, the end papers, the writing. And I wanted Jenny Lawson to be my friend. (Next best thing- I’m following her on Twitter, and thank fully, she posts regularly.) This was one of those books that I was reading at night, shaking the bed with my silent laughter while trying not to wake my husband. So the next morning, I asked, “Could you feel the bed shaking last night while I was reading this book?” He said, “No, but I heard you laughing.” So much for my lame attempt at late night bedroom etiquette.

The book is a memoir, and shouldn’t be funny because it’s about mental illness and physical pain, but Jenny Lawson’s unique way of looking at the world  and the way she describes it is hilarious. Here is the book’s dedication:
“This book is dedicated to my daughter, the giggling witness to the strange and wonderful world her family has created out of insanity (both real and hyperbolic). God help us when she’s old enough to write her own memoir.

Amid the insanity and hilarity are many truths. Lawson ruminates on her adequacy as a parent, worrying about whether or not she makes the grade, as most parents do. In this context, she observes that her daughter, Hailey, was often bored, not having her life scheduled from moment to moment by her parents. Lawson’s views on this particularly resonated with me, because I couldn’t agree more:
“… boredom is good. It makes up most of your life and if you don’t figure out how to conquer it when you’re a kid then you’re sort of fucked as an adult.”
At some point earlier in my adult life, I thought about things that I was grateful for, and one of them was that my parents had let me be bored, to figure out how to amuse myself, because I never would have survived my summer jobs through college if I had a low threshhold for boredom. Four summers on an assembly line! And later, correcting papers for 34 years! 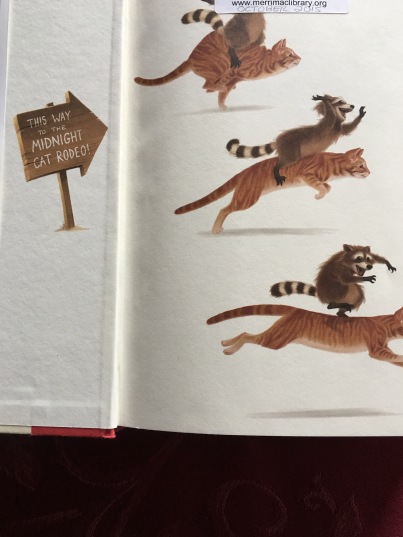 The endpapers. Midnight Cat Rodeo. You’ll just have to read the book.

THE BEAUTY: Meet Rory the Dead Raccoon. He’s the reason for the cover and the end papers. When she was little Jenny had Rambo, a rescued, orphaned raccoon. Her father was a taxidermist, yada, yada, yada, and Rambo lived on. In adulthood,  Jeremy Johnson, Jenny’s friend who was also a taxidermist, made Rory so awesome. Jeremy not only made Rory, but a smaller version, Rory Two. So Jenny has two furiously happy raccoons who never let her down. They’re always glad to see her and give her high fives to celebrate her accomplishments, big and small. I want one. Really. Only one. What a more perfect visual expresion of “furiously happy” could there be?

Jenny expresses her opinions on food in “An Essay on Parsley, Wasabi, Cream Cheese, and Soup.” On parsley, “not a fan.” In fact, she reports that seeing it less on her plate in restaurants nowadays tells her that Americans are eating more sushi and less “Americn food.” (The quotes are mine, not hers.) That of course segues neatly in wasabi. “No one ever finishes it.” (Italics and words are hers.) Cream cheese? I’m not going there. You’ll have to read it yourself. Jenny was at a patio party once where she heard they were serving soup as an hors d’oeuvre. Wondering how that was even possible, she spied the waiters handing out flat-bottomed spoons with one slurp of soup in them. And it wasn’t even warm soup. It was gazpacho!

Roughly chop the cucumbers, bell peppers, tomatoes, and red onions into 1-inch cubes. Put each vegetable separately into a food processor fitted with a steel blade and pulse until it is coarsely chopped. Do not overprocess.

After each vegetable is processed, combine them in a large bowl and add the garlic, tomato juice, vinegar, olive oil, salt, and pepper. Mix well and chill before serving. The longer gazpacho sits, the more the flavors develop.

I am a lifelong tomato lover. When I was little and we went on family vacations, my poor, shy, father would have to order a BLT for me for breakfast because I didn’t like traditional breakfast food. He wasn’t always successful, but he always tried. Talk about being a good parent! So I love pretty much all food that centers around tomatoes. Had I known about gazpacho when I was seven, I would have loved it for breakfast.