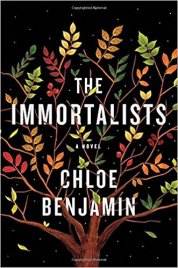 THE BOOK: When I finished reading the last page, I paused, and thought, what is this book about? Some themes were obvious: family, siblings, finding your own way into adulthood, choices. But there also seems to be so much more going on underneath all that, and I attribute that to the CHOICES this author made in crafting her story. For example, when I came to a plot point that I found implausible, (there were two, actually) I thought that the character simply would not have acted in that particular way based on what information the author had revealed about her. But the more I thought about it, the more I realized that what the author didn’t say about each of the characters was just as important as the things that she did. And that’s what made those two sticking points ultimately work for me, because in life, we think we know our loved ones, our friends – ourselves, and can predict what they will do. But in fact, there is much that is unknown to others beneath our veneers. That, coupled with the fact that different people will interpret observable behavior in different ways, makes it nearly impossible to be completely surprised by the actions of even those closest to us.

When the novel begins, the Gold children are surreptitiously making their way to a house in their neighborhood in 1969’s New York City. Having heard the rumors of a traveling psychic who arrived on Hester St., they have to sneak past their father’s tailor shop on the way to their destination. Eleven year-old Daniel leads the way, followed by Varya, the eldest at thirteen, Klara, 9 and Simon, 7. What the pyschic tells each child, shapes their lives in ways that are both interesting and exciting to read about.

I read this book in one sitting. (Late night reading due to insomnia, followed by reading well  into the next day, which turned out to be a snow day!) I never lost interest in the story, and could not wait to see what would happen next. I think the writing was masterful, because I didn’t notice it as it propelled me through the narrative. I think it would be a good book for group discussion, because right now, I wish I had someone to talk to about it while it’s still fresh on my mind.

In a scene near the end of the book, Varya finally tells her elderly mother about that long ago visit of the Gold children to the psychic. When Gertie, her mother, pooh poohs the predictions the psychic made for each child, she calls it junk, as in “How could you believe such junk? After everything I gave you: education, opportunity- modernity! How could you turn out like me?” Finally, Varya understands that her parents, immigrants, gave their four children the freedom of uncertainty. The freedom of an unsure fate. Her parents had few options when they were young, and their choice to emigrate to America was a scary, and unselfish beginning to a lifetime of unselfish choices that gave their four children opportunities for a better life. Varya’s mother and father abandoned their dreams in order to support their family. Varya and her siblings had choices, and the luxury of self-examination. Especially now, while a DACA decision deadline approaches in the immediate future, the beauty is the immigrant stories that contribute to the fabric of American life.

Varya’s friend, Ruby, lives on the sixth floor of their apartment building. Her family is Hindi, and Varya frequently trades her own mother’s kugel for some of Ruby’s mother’s spiced buttered chicken. They eat their delicacies on the fire escape and talk about the strange woman who has reportedly come to town.

To Marinate, Part 1: Place cubed chicken in a nonporous bowl with yogurt, lemon juice, chili powder, salt and liquid smoke. Thread the chicken pieces onto some pre-soaked bamboo skewers to marinate. This makes getting the pieces out of the marinade much easier and less messy. Refrigerate for 1 hour.

Preheat oven to 400°F. Place chicken on an oven sheet and bake in preheated oven for 20 minutes.

Place cooked chicken in sauce mixture. Simmer on medium-low heat for about an hour or until liquid is reduced by ⅓.

Salt to taste and garnish with fresh chopped cilantro (optional).

**Be careful with the liquid smoke, it can easily overpower the dish.
When you simmer the sauce, be careful not too reduce it too much, or it will become a bit too red and “tomato’y”. Butter Chicken should be a nice orange color.

**You will need to go to an Indian grocery store for the fenugreek leaves though. Standard grocery stores will not carry them. Do NOT use seeds instead of leaves! Fenugreek seeds are very bitter whereas the leaves are more sweet. (I think the dish would have been fine without the fenugreek, but I had it, so I used it.)

We give the dish 2 enthusiastic thumbs up.