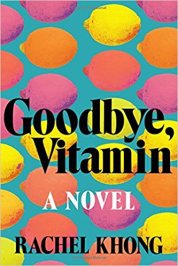 One holiday, thirty year-old Ruth Young spent Christmas with her parents and decided at the end of the visit that she wanted to come back to live with them for a year. So she does. During this time, she keeps a diary, recording things that happen, her memories and reflections of her childhood, and of her family’s history. She learned that her father, Howard, had begun a journal himself, starting when she was small. Initially, the reader sees only a few snippets of what Howard wrote, but as more and more are revealed, the reader is treated to a precious view of a father’s love for his funny, quirky, intelligent daughter, reflected in his observations of her. Here is the first entry:
“Today you asked me where metal comes from. You asked me what flavor are germs. You were distressed because your pair of gloves had gone missing. When I asked you for a description, you said: they are sort of shaped like my hands.”

There were many random facts in the book that sent me googling nearly every page. If the information sticks in my brain, I will have learned a great deal that should help if I’m ever on Jeopardy. The first fact was revealed when Ruth met a trucker named Carl on the road. He was transporting endive and they happened upon one another at a gas station. As they were saying their goodbyes, Carl handed Ruth a pamphlet entitled “Cookery by Carl.” He said that someone told him there’s a tradition in Thailand that before you die, you compose a cookbook that is then distributed at the funeral. Later on, when someone is looking for something to cook and they crack open your book, not only to they get a recipe, they get to think about their old friend, Carl. Lovely gesture from a foodie!

The book was so many things. A story about family, about love and loss, and the decisions we make, or don’t make. In spite of the sometimes seriousness of the plot, the tone of the book was light, witty, and entertaining. I loved the characters and experienced that sense of loss that happens when a book ends and you’re not going to be able to spend time with the characters any more. Mine was a library book, but I loved it so much, I’m going to have to buy it, because I want to savor it again, knowing that the book in my hands is mine.

Ruth drives from San Francisco south to her childhood home to visit her parents. As the San Gabriel Mountains come into view, Ruth reflects on her conviction as a child, that it is a picture-perfect vista. So picture perfect, in fact, that she not only thought that it looked like the posters you affix to the back of a fish tank, she believed it was a photograph of those specific mountains. “That other mountains existed didn’t dawn on me until embarassingly late in the game.” This photograph is “San Gabriel Moutains at Sunrise,” by Alex Cameron. I found it on Pinterest

When Ruth visits her uncle, John, her father’s brother, he makes her mackerel baked in foil for lunch. When she teases him about not getting the memo about using foil, (her mother believes that food cooked in aluminum foil or aluminum pots and pans is harmful to one’s health) “Your mother is nuts,” he says. That reminds Ruth of her mother’s quest to make homemade Cheetos when Ruth 9 or 10, because Ruth had become obsessed with them. They took a tour of the Frito-Lay factory in Bakersfield where they sampled Cheetos fresh off the conveyor. A few weeks later, Annie produced an impressive Cheeto for Ruth. While there may have been more meaningful and healthier foods I could have selected, I loved this story, and hope I’m not nuts for wanting to recreate Annie’s act of love in a homemade Cheeto.

MAKE THE CHEESE CURLS: In the bowl of a stand mixer fitted with the paddle attachment, beat the butter, salt, and garlic powder at medium-low speed for 1 to 2 minutes. Scrape down the sides of the bowl and add the flour, cornmeal, and shredded cheese. Stir together at low speed until a firm dough forms. Shape into a disc and place on a large sheet of plastic wrap; wrap tightly and refrigerate for 1 hour.

Pinch off small pieces of the chilled dough and gently roll between your palms and fingers to form lumpy logs roughly 2 to 2½ inches long and ¼ to ½ inch across. Place on the prepared baking sheets—you can space them fairly close together because they won’t puff up while baking.

Bake for 12 to 15 minutes, until the pieces are no longer shiny and are just beginning to brown around the edges. Transfer to a wire rack and let cool completely.

ADD THE COATING: Place the cheese powder, buttermilk powder, salt, and cornstarch in a spice grinder or mini food processor and whir for 10 to 15 seconds to blend evenly. I couldn’t find cheddar cheese powder, so instead I used Nacho Cheddar Popcorn Seasoning from the snack aisle in the supermarket. (Do not add the other coating ingredients if you use the popcorn seasoning.)

They are best comsumed the day you make them. The leftovers on the second day started to get a little limp. Restraint was the only thing preventing me from eating them all on that first day. They’re not the healthiest snack, althought they would have been worse if I’d used a recipe that deep fried them. I loved this salty treat. (They’re very filling!) 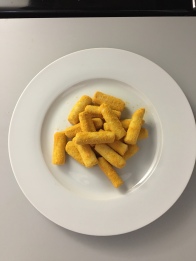