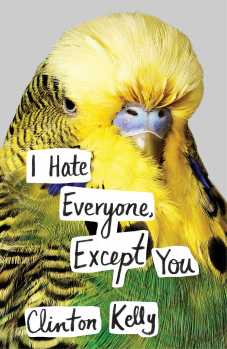 This collection of essays had me laughing out loud in places both public and private. My favorite one, called “Clinton for President,” contains the phrase “…at which point she assumed I had a ‘special friend’ over,” which, for reasons I can’t go into without spoiling the story, had me hooting like a hyena.  In sharing stories about his family and growing up in Port Jefferson Station, New York, the child behind the man is explicated, and who he is as a human being is revealed, sometimes hysterically.  I became retroactively envious of Lisa, a high school friend who helped Clinton lay a guilt trip on a fetal pig, and Meredith, the Wendy’s cashier who withheld revelation of a crush from Clinton (because he’s a guy), but not Lisa. There are a few words that will never be the same for me, due to Clinton’s unique usage of them. They are, in no particular order: leprechaun, Kamikaze, prolapsed anus and punchbowl.  I loved his idea of mandatory restaurant work for all Americans, like military service, only more random. This system was not designed to level the economic playing field, but to ensure that every citizen over the age of twenty-one understands what jerks people become over their pork chop in a restaurant. When you’re drafted, which can come at any point in your life, you report to the Bureau of Food and Beverage Service where you are assigned to a restaurant within a fifteen mile radius of your home, for two years of service. Finally, I cannot end this review without acknowledging one of the most truly profound and profane commencement addresses I have ever heard. Genius.

When the show “What Not to Wear” ended, Clinton was asked about his favorite and least favorite makeovers and the worst fashion mistakes he had ever witnessed. No one ever asked him what he had learned about women during those ten years of listening to their concerns about their bodies and their clothes. What he learned was that women want to feel beautiful. He felt qualified to make that generality based on asking the question over and over and over. According to him, the problem is that women spend so much more time than men paying attention to competing with and worrying about everyone else but themselves. Every time you make a comparison, you lose. Someone else’s beautiful hair or skin has nothing to do with you.
“And the more you keep comparing, the less your own beauty becomes self-evident. Just because you’re not a supemodel, movie star, or Instagram celebrity does not mean that your beauty is less important than anyone else’s. Sure, it’s OK to look, even admire, just be careful when comparing apples to oranges. (Apple: You getting yourself ready for work in the morning. Orange: Woman who has paid a stylist, personal chef, trainer, light director and photo editor to help her post “selfies.”) Sometimes the beauty is simply an idea or an observation.

In the essay called “Stockholm Syndrome,” Clinton started having disturbing visions connected to the political scene in 2015. He was convinced that he could expunge them in Scandinavia and talked his Swedish-meatball loving husband into taking a vacation in Sweden. While there, they both developed a love for skagen, essentially shrimp salad on toast, and the food I selected from this book. You’re probably wondering why I didn’t go for the Swedish meatballs. While I have made them as an appetizer in the past, given a choice between shrimp and veal (the ones Clinton had in Sweden were made of veal), I’m always going to opt for shrimp.

Spoon a generous amount of shrimp mixture onto toasts. Top each toast with caviar, (I used supermarket black lumpfish caviar) and garnish with dill sprigs. Serve with lemon wedges. Shrimp mixture can be refrigerated 1 day.