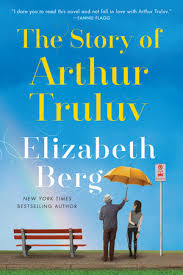 I had never read Elizabeth Berg, but a friend has read a lot of her, so I was hoping that I would like this book. I did! Like A Man Called Ove, it had the potential to be cloying, but also like Ove, it wasn’t. Ove was a curmudgeon, Arthur is not. He’s a mensch. A widower, still missing the love of his life, Nora, he lives a quiet, somewhat lonely life with Gordon, the cat, who Nora adopted from the shelter. When she first brought Gordon home, she called him Precious! When we first brought Mary home, I kept calling her “Precious,” (because she was) Finally, Jim said to me, “We’ve got to get a name for this cat. I can’t keep calling her Precious,” just like Arthur said to Nora. Throughout the book, I kept remarking out loud, “Oh, my, that’s just like us, (or me).” Like when on page 18, Lucille the neighbor gives Arthur a tin of snickerdoodles. There was a book for children called Maniac Magee by Jerry Spinelli, that we used in our 6th grade literature class. Set in Philadelphia, there was a mention of snickerdoodles, which my Philadelphia teacher friend knew how to make, so when we finished the book, we’d serve snickerdoodles. One more personal connection, although there were many more: There was a a forty-ish character described as “a kind of blowsy-looking blonde named Trudy.”

The book is about the unlikely relationship of Arthur, Maddy and Lucille. Arthur is very intuitive, inventing biographies of people about whom he knows very little. He’s also kind and friendly and matter of fact. Maddy isn’t afraid to befriend people much older than her, and Lucille is one heck of a baker. The book ends with a heart-warming scene, one that makes you feel really good. One that makes you wish the book were a little longer.

THE BEAUTY: It seems that I’ve read several books recently where the protagonist has recently lost a spouse, and the will to live. What the books have in common is that the way through grief is by maintaining connections to other people. There is healing power in taking care of someone else. I turned to Google for songs about friendship and since there was one by Bruno Mars, I chose it.

You probably though it was going to be snickerdoodles, but surprise! It’s not. There’s an important scene in which white chocolate pudding with blackberry curd plays a role. Also, the dessert is very impressive looking. Also, even though there was a lot of delicious food mentioned throughout the book, this is the recipe my husband chose when given the choice of hamburger soup, snickerdoodles, or the pudding.

For the blackberry curd:

To make the pudding, combine the cornstarch, sugar, and salt in a heavy bottom saucepan. Whisk in the milk, scraping the bottom and sides of the pan with a heatproof spatula to incorporate the dry ingredients. Place over low heat and stir constantly, scraping the bottom and sides. Use a whisk as necessary, should lumps begin to form. After about 15 minutes, when the mixture begins to thicken and coats the back of the spoon, add the chocolate. Continue stirring for about 2 to 4 minutes, or until the pudding is smooth and thickened.

Remove from the heat and stir in the vanilla. Strain the pudding through a fine-mesh strainer into a bowl with a spout, and pour into individual serving dishes. Chill in the fridge for at least 4 hours.

Meanwhile, purée berries in a food processor or blender until as smooth as possible. Press through a fine-mesh strainer to remove seeds. You should have between 3 and 4 tablespoons of purée.

Whisk together the blackberry purée, lemon juice, sugar, salt, and egg in a heavy 1-quart saucepan. Stir in the butter, and cook over moderately low heat, whisking frequently, until the curd is thick enough to hold the marks of the whisk, and until the first bubble appears on the surface, about 4 to 5 minutes. Divide the curd among prepared cups, gently spreading it on pudding surfaces.

Let chill for 1 hour before serving.

My dessert cups held 8 ounces and were too big because the pudding is so filling. In the future I would use champagne flutes with iced tea spoons to serve. It really is a beautiful presentation, and the blackberry curd is like nothing you’ve tasted before. If you can’t get blackberries, any berry will do. It’s just that the blackberry has such a distinct color, it’s the preferred berry.