Thandi grew up middle class, with a South African mother, and a father from New York city. Her parents met on a volunteer trip to Botswana, and later settled in Pennsylvania where her father was a mathematics teacher for many years before being promoted to head of the department of the college. The story that unfolds is Thandi’s journey through her mother’s cancer diagnosis, and the subsequent caretaking that it eventually entails. As Thandi becomes further and further unmoored by her mother’s decline, she seeks refuge in boyfriends, looking for an anchor to tether her to the world of the living, and distract her from her mother’s inevitable demise. There are many musings- some about South Africa after apartheid, and American Blacks, who were the epitome of cool to teenaged Thandi and her best friend, Aminah. When Aminah and her high school boyfriend, Frank’s relationship grew stronger in college, even though they were separated by hundreds of miles, “… I (Thandi) realized that the divergence between our love lives- which had begun in high school- would be permanent.” There is one heartbreaking passage when Thandi awoke in the middle of the night at her parents’ house to find her bald mother hovering over her. “I want to go home,” she said. As Thandi reassured her that she already was  home, it suddenly occurred to her what was really going on, and she once again felt helpless, small and worthless, because of that one thing she could never do for her mother. So much of this story rings true to me about losing a loved one, particularly your mother. I could also relate to the young adult woman trying to find her own way, her own voice, in the shadow of the mother she loved so very much.

Thandi reveals a secret she has kept from her family: South Africa terrifies her- because of the violence. Although she herself had not been victimized by it, her mother had her purse stolen once in a smash and grab and never drove alone again. So while most of what Thandi knew of violence was secondhand, through her family or the news, “Together, the stories and pictures constitute a vision of death and carnage that is overwhelming, incongruous to the plainspoken beauty of the country.” The image below is from iSimangaliso Wetland Park, a world heritage site for its biodiversity due to a variety of ecosystems. As I look at this picture, and imagine myself in the landscape, I, too feel the beauty of South Africa, a place that could put me so close to these magnificent creatures. The word “iSimangaliso” means “a miracle” or “something wondrous” in Zulu. Well-named. 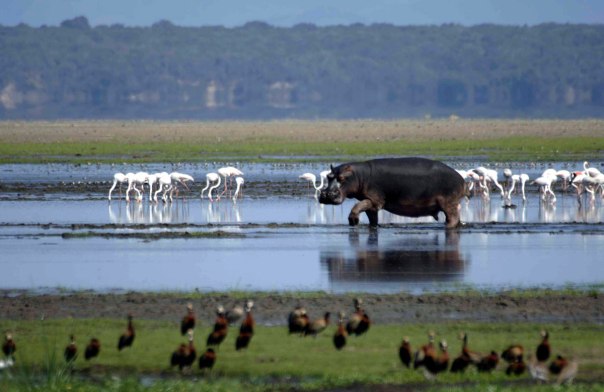 Thandi spent the last Christmas with her mother (and father) in Johannesburg. At her grandfather’s for dinner one night, they had beef tongue, fish biryani, and trifle. Before everyone went home, the family gathered for a prayer of departure. Her grandfather thanked God for all his family, and for Thandi’s family’s safe flight home, and then with a quavering voice, he asked God to heal his daughter, Thandi’s mother.

Heat the oil in a pan and sauté the onion, cardamom seeds, cloves, cinnamon, ginger and garlic until the onion is tender and all the flavours have blended. Add the fennel seeds, cumin, coriander, garam masala and a little water. Simmer until an aromatic paste has formed. Remove the cloves, cinnamon and cardamom seeds before the next step. (I didn’t and later, the experience of the whole clove in my mouth was jarring.)

Season the fish with salt and 1 tsp garam masala and add to the paste, along with the potatoes. Fry until the mixture is a nice yellow color. Cover and braise until cooked. The potatoes should be tender but still whole (about 15-20 minutes). Add extra water if necessary.

Put the lentils in plenty of boiling, salted water and cook 5 minutes. Add rice and turmeric to water and continue boiling until done, about more 20 minutes. Drain and set aside.

Arrange the fish mixture in rice in a saucepan. Add a little water, cover, and steam for about half an hour. Garnish with quartered hard-boiled eggs.