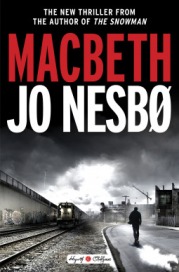 Other than As You Like It which I read in 2016, I don’t recall having read any Shakespeare since high school, when it might have been Romeo and Juliet, or not, I seriously don’t remember. In high school, I thought Shakespeare was very boring and had to have everything explained to me. I felt inadequate, because, even though it was English, I understood very little of what was going on. Then we went on a class trip to a production of Shakespeare (again, I can’t remember what play) and I was shocked that people in the audience were laughing. I mean, laughing at Shakespeare! It was supposed to be funny? Who knew? So, I’ve always thought Shakespeare was out of my league. Then I heard about Hogarth’s Shakespeare project to oversee his works retold by acclaimed and bestselling novelists of today. I’ve read only four of the seven that have been published since 2015, starting with Margaret Atwood’s retelling of the “The Tempest,” called Hagseed.

Although I never read Jo Nesbo’s crime fiction, I had heard of him and knew he was among the best, if not the pinnacle in the genre, so I figured his rendition of Macbeth would be interesting, and that it was, along with complex and layered. I knew I should keep a list of all the characters, because that is one of the problems I had with the bard himself – so many characters to keep straight. One of the things I loved from its first introduction in the story was the journey of a single rain drop, imagery that reappeared, and served to draw the story to a satisfying conclusion at the end of the book. The magical qualities possessed by Lady, the witches, Seyton, and others, were subtle, and since I didn’t have a thorough understanding of the original work, I felt I was missing something. Macbeth’s transformation was the hardest thing for me to accept since he didn’t seem to have a strong need for power. His ambition was fueled by his love for Lady, who did have the uncompromising will to get to the top. I suppose that if I understood drug addiction from experience, either my own or someone close me, I would get how the drugs induce the feeling of omnipotence. Macbeth did say repeatedly that he felt like a new man, and then proceeded to act in a way that contradicted the character introduced at the beginning of the story.

There was much here that spoke to contemporary readers. 1. After Strega delivered the prophecy to Macbeth, she tells Hecate, “Human ambition will always stretch toward the sun like a thistle and overshadow and kill everything around it.”  2. Vera, beloved wife of Banquo, died of lung disease that she contracted during her employment in the town’s factories. Factories whose released toxins polluted the air, which was then forced down by low pressure weather systems hovering over the town like a lid. 3. A truth that was repeated many times was that “we never become what we aren’t already.” Duff used this knowledge to bring down Macbeth in the end.  Having known him since childhood, Duff knew that Macbeth wouldn’t harm a defenseless man. It was against his nature, overruling even the instinct for self-preservation.

The intense detail about the ambushes that Macbeth engineered as the head of SWAT distanced me from the story. I’m really not interested in reading the nitty gritty details of crime fighting, and like an action movie, for my taste, there was way too much of that. Having said that, I was totally engrossed by the characters and the inevitability of outcome based on a character’s integrity and ambition. The end was great: a complex web woven together from multiple strands and stories, creating a satisfying conclusion.

THE BEAUTY: This being a tragedy, finding beauty was a challenge. The truths about human nature revealed in Macbeth, are beautiful in their ambiguity and accuracy. The love expressed between Lady and Macbeth, Banquo and Vera, and even Duff and Caithness, was beautiful. But once again, it is the music to which I ultimately turned. Macbeth heard strains of Todd Rundgren’s “Hello It’s Me” as he made his way down an alley to identify a body. I loved that song back in the day, but after I heard Lindisfarne’s “Meet Me on the Corner,” I was hooked and have had this earworm in my head for day. Hopefully you won’t have that same experience. I preferred this version to the original recorded in 1972.

Even though meals were mentioned, there wasn’t anything specific, so I focused on a scene where Duff is looking forward to going home to his wife and kids. Simultaneously, the reader sees that Meredith, his wife, has hung the sheets out to dry, while his daughter dutifully stirs a pot of broth awaiting the arrival of her father. When I googled “Scottish broth,” I found that in the 70’s when this Macbeth is set, there was a very popular stew that Scots turned to for comfort. Its main ingredients were lamb, barley split peas and lentils. Not being a lamb fan, I modified some recipes to make the vegetarian version below. The irony of this particular recipe is remarkable in that the scene that follows the one I described above is the antithesis of domestic bliss.

The combination of barley, split peas, blue peas and lentils should equal a cup. If it doesn’t, add more pearl barley.

Heat the oil in a large pan. Add the onions and celery and saute on medium until lightly softened, about 5 minutes. Add garlic and bay leaves and cook, stirring constantly until fragrant, about a minutes. Add barley, split peas, lentils, 4 sprigs of thyme, salt and broth. Bring to a boil, reduce heat to simmer and cook for 1 hour. Skim off any foam. Add more water as needed

Add carrot, turnip (or rutabaga), parsnips and leek and simmer for another hour. 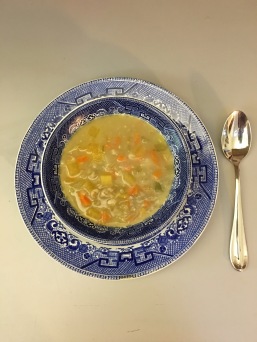 A very hearty soup, perfect for a cold wintry day.