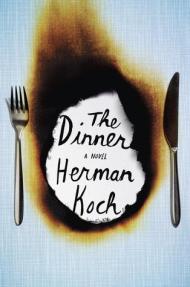 What a disturbing book. I was reminded of Defending Jacob by William Landay, although that one was more of a page-turner. One of the main differences between the two was the way Jacob’s father looked back on his son’s past to consider whether or not he had missed clues about his son’s nature. Paul does this only sparingly, making this book more economical, not only in length and depth, but in character development. Yes, the characters are mostly unlikeable, but as Paul points out in his history class, were all the victims of all the atrocities in the world’s many wars nice people? Probably not. But the question for the reader then becomes, does that make them any less a victim? Did they, then, deserve their fate? And, disturbingly, it is here in the story where I truly began to understand Paul. There are several plot points that Koch is deliberately foggy about, including something that is wrong with Paul: a syndrome, an illness, a hereditary characteristic. Something. Also deliberately unclear is the reason for his wife, Claire’s sudden hospitalization. Did it have anything to do with Paul? After all, the incident was reported by Paul, not Claire, so we learn of it only through what he chooses to tell us. Ultimately, it is sometimes the characters to whom we can best relate, who seem the most normal, that are the ones to be most feared.

Having skimmed through the book several times now, looking for the beauty, I keep coming back to the notion of parental love. That should be the beautiful thing in this story. However, can something be beautiful and horrible at the same time? And is it really love that would make a parent do unspeakable things in order to protect their child? Or is it, instead, a way of protecting some extension of oneself? All good questions for discussion.

Serge and Babette and Paul and Claire have met for dinner to discuss their fifteen-year-old sons. Serge is a well-known politician, and his younger brother, Paul, is a high school teacher. The evening, told from Paul’s perspective, describes what went on during each course. Serge has chosen a trendy, pretentious restaurant where the portions are miniscule, the prices are exorbitant, and everyone knows and fawns over him. Paul describes Claire’s appetizer thusly: “The first thing that struck you about Claire’s plate was its vast emptiness. Of course, I’m well aware that, in the better restaurants, quality takes precedence over quantity, but you have voids and then you have voids. The void here, that part of the plate on which no food at all was present, had clearly been raised to a matter of principle. It was as though the empty plate was challenging you to say something about it, to go to the open kitchen and demand an explanation. ‘You would’t even dare!’ the plate said, and laughed in your face.”

One interpretation of this phenomenon is horror vacui, meaning “fear of empty space.” I know this because I saw it used at the DeCordova Museum last week to describe an artist’s approach to a particular canvas; was charmed by it; and vowed to my friend that I would work it into my lexicon in the near, if not immediate future. So there you have my explanation for this minor digression from the business at hand, which is, of course, identifying the context in the book for the recipe that I’ve selected.

When the manager approached their table as the appetizers were served, he said, “The crayfish are dressed in a vinaigrette of tarragon and baby green onions’… he was at Serge’s plate now, pointing with his pinky.’ And these are chanterelles from the Vosges.” (The Vosges are a range of low mountains in eastern France near its border with Germany.) I love crawfish, and wondered where you would get them in Europe, as this story takes place in Amsterdam. Turns out, there is a species of crayfish (note the spelling) in fresh waters in France, throughout central Europe to the Balkan peninsula and north as far as the British Isles, Scandinavia and eastern Europe. In all of my reading, and touring in England, Italy, France and Greece, I had never come across crayfish on a menu or in a cookbook. This was a revelation that also charmed me.

If using lobster, fill a large pot with enough water to easily cover the lobsters. Bring to a boil. Place the lobsters in the boiling water, cover, and cook about 8-9 minutes. Drain and cool. Break off large claws and legs. Crack claw and leg shells using a nutcracker; remove meat and set aside. Break off tails. Cut (using kitchen shears) the shell of the tail segments lengthwise on the underside. Pry open the tail segments; remove meat, and cut into ½-inch slices. Chill the lobster meat.

If using shrimp, bring a large pot of water to a boil. Put frozen shrimp in a colander, place the colander in a large bowl and cover the shrimp with cold water to thaw them. Let them sit for 10 minutes. They should be completely thawed before you cook them. Place thawed shrimp in boiling water, and  cook for about 2 minutes, or until shrimp turn pink. Remove shrimp and place in an ice bath until cool. Remove shells and chill the shrimp.

If using frozen crawfish, bring a large pot of water to a boil. Put crawfish in a colander and rinse them. If they have been previously cooked, they will only need about two minutes in the boiling water. If they are raw, they’ll need longer time in the boiling water, 5 minutes or until the shells are red. When cooked, place in colander and run cold water over them to stop the cooking process. Remove shells and chill the crawfish.

Combine minced shallots and next 7 ingredients in a jar; cover jar tightly, and shake vigorously.

Arrange lettuce on individual salad plates; top with crawfish, lobster, or shrimp and drizzle with shallot mixture. Garnish with a tarragon sprig, if desired.