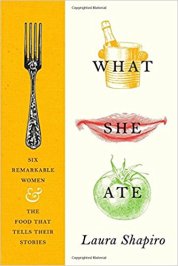 This is an engaging book about one of my favorite subjects. Shapiro begins with a well-worn Brillat Savarin quote, “Tell me what you eat, and I shall tell you who you are.” Laura Shapiro found her way into this book through insomnia. Hoping that a visit to the Lake District in a biography of Dorothy Wordsworth would lull her to sleep, she had an “aha” moment when she read that their cook was feeding them black pudding for dinner. Here was a woman that Shapiro thought she knew, one devoted to her brother, William, leaving him the time and space to create his poetry. As she researched what the Wordsworths ate and how Dorothy cooked, she began to find someone different from the portrait that had become conventional wisdom about Dorthy Wordsworth, and that was the seed of an idea that grew into this book.

Focusing on six women from different continents and time periods, Shapiro tells their stories through the lens of food. After all, food is with all of us every day, and has a lot to say about who we are and what we value. The other women are Rosa Lewis, an Edwardian-era Cockney caterer who cooked her way into high society. Edward himself loved and sought out her cooking. Eleanor Roosevelt, whose time in the White House was grim, culinarily speaking. When guests were invited to a meal at the White House, they were advised by those who had been there, “Eat before you go.” Eva Braun, Hitler’s mistress, who reportedly ate very little in order to maintain her slim figure, was the consummate hostess, “a man’s woman,” according to Albert Speer, Hitler’s Reich Minister  of Armaments and War Production for Nazi Germany, meaning that she was undemanding and passive. I found it the least interesting vignette, because there was more Hitler in it than Braun. Barbara Pym, who Thomas Otto of “The Readers” podcast loves, and who I never read, but soon will, whose reputation as an author was summed up as “depicting drab spinsters pouring tea for the clergy while life dwindles quietly away.” This was my favorite chapter, probably because there was so much about Barbara Pym’s books in it. The final chapter was about Helen Gurley Brown, to whom I had difficulty relating. She didn’t eat much, because all she really aspired to was being thin. I also think her husband was kind of a jerk. But in spite of that last chapter, I really enjoyed this book.

In doing some googling, I found that there is “The Barbara Pym Society,” an international society devoted to her work and legacy. They have an annual general meeting at St. Hilda’s College, Oxford University every summer; a conference in Boston every spring; a spring meeting in London; and other events. There is an afternoon tea at The Church of the Advent in Boston November 4, 2017 at which Laura Shapiro is going to speak! ( I’m going to try to go. Hopefully, more on that later.)

When I read about the black pudding in the Wordsworth chapter, I knew I wasn’t going to make that! There was so much to choose from, I really had to pare down my choices. The ones that I considered were: Rosa Lewis’s croquettes or Baisers de Vierge (dessert made of meringue, vanilla cream, crystallized white rose and violet leaves, and spun sugar); Barbarbar Pym’s risotto or chicken tarragon. The recipe below was inspired by Pym’s diary of what she served for company. “For the most part she chose honorable dishes from the best-tablecloth tradition of British cookery… including salmon timbales.” I had a recipe for a salmon loaf that I’ve been making for years, but I searched for timbales, and am so glad I did. This recipe is excellent.

Preheat oven to 350º degrees. Grease 4 custard cups. Microwave onion for 2 minutes. Combine salmon, onion, bread crumbs, yogurt, mayonnaise, egg and pepper in bowl; stir well. Divide into cups. Pack well. Bake at 325 degrees for 30 minutes. let sit for five minutes before serving. Run a knife around the salmon to loosen it, hold over a plate and gently shake to release. Serve with Cucumber Dill Sauce.
The can of salmon I used was only 14 oz, so the 4th custard cup was a bit light.

Mix all ingredients for dill sauce. I served it cold, but you can warm it gently on the stove, stirring for a couple of minutes. This was excellent, but we love tsatsiki, so next time I make this, I’ll make a lot of it so I can use some on the salmon and have leftover tsatsiki the next day.