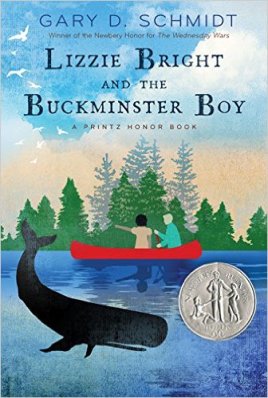 After a slow start, I became invested in Turner’s story when he began to grow into himself. Roughly based on an actual episode on Malaga Island in Maine in the early 1900’s, the story is a great starting point for a discussion with Middle School students because their sense of justice is finely tuned, even though most of them are guilty of having already given in to peer pressure to preserve their own dignity and cool factor at some point in their young lives. The community on Malaga Island was founded by former slaves. Turner’s family moved to Phippsburg, on the mainland across from the island,  when his father was appointed pastor of the First Congregational Church. Turner is immediately homesick for Boston, until he meets Lizzie Bright, an orphan who lives on the island with her preacher grandpa, Reverend Griffin. The Phippsburg town fathers have decided that they need the tourist trade to jump start their economy, and Malaga Island is too much of an eyesore, so its inhabitants must go. Pressure is applied to the islanders and anyone who doesn’t support the will of the powers that be. Turner has an ambivalent relationship with his father early on, because of his many youthful missteps that reflect poorly on his father.  Eventually, Turner must decide for himself with whom he wants to interact in his new community. Watching Turner grow up in this story, and the intimations of the kind of man he will become, was joyful.

Schmidt’s descriptions of the natural world of Maine evoke vivid mental pictures and memories of salty air, low tide, pine trees and sea breezes. Turner and Lizzie spend a lot of time together exploring the bay area in her grandpa’s dory. One day, Lizzie fell into the mud flats and hit her head on a rock. Turner helped her back into the boat, but Lizzie, injured and nodding, could not captain as she usually does, so it’s up to Turner to man the dory and get her safely back to the island, even though he’s never rowed a boat before. It is during this journey to safety that Turner has a magical first encounter with whales. A whale five times the size of the boat rode quietly alongside them. When the whale flipped its tail and began to roll side to side, so did the dory.When the rocking finally stopped, Turner quietly slipped the oars into the water and rowed forward, hoping the whale would wait on the surface. It did. And when the boat reached the front of the whale, they looked at each other a long time-two souls rolling on the sea under the silvery moon, peering into each other’s eyes. Turner wished with a desire greater than anything he had ever experienced that he might understand what it was in the eye of the whale that shivered his soul. While this might have been a harrowing experience, through the entire episode, Turner remained calm, unafraid. And through his travails in the future, he comforted himself with the thought, “I have looked into the eye of a whale.”

Much of the time when Turner meets Lizzie, she’s digging clams. The first time Turner went to Malaga Island and met Reverend Griffin, he made chowder for Lizzie and Turner and all the Tripp children, which they all ate outside on the rocks in the sun. Turner wasn’t sure if it was the scent of the chowder or of the sea that filled him, but to him, it was as good as any baseball game played on Boston Common.

Bring the 1 cup of water to boil in large covered saucepot. Add the clams and garlic. Cook 6-10 minutes over med-high heat, or until all the clams have just opened. Discard any that didn’t open.  Drain clams, reserving the broth. Strain the broth through coffee filters or cheesecloth to remove grit. Remove the clams from their shells, chop finely.

In a large heavy saucepot, cook the salt pork over low heat until the fat is rendered and becomes liquid. Using a slotted spoon, remove the “cracklings” and reserve them.
Add the onions to the fat and cook over med-high heat for 5-7 minutes, until softened but not browned. Add in flour and cook for 3 minutes, stirring constantly. Add the reserved clam broth, the 2¼ C of clam broth and the fish stock; whisk to remove lumps. Bring the liquid to a boil; add potatoes, reduce heat and simmer for about 15 minutes or until the potatoes are cooked through.

Stir in the clams, salt pork and the light cream. Heat chowder to desired temperature.
Serve with oyster crackers.

1 thought on “Lizzie Bright and the Buckminster Boy”